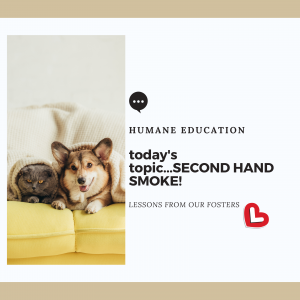 Most of us know that second-hand smoke can hurt those people surrounding anyone who smokes, but did you know that it can hurt pets too? Chance came to Laber of Love Pet Rescue from a home where the humans smoked very frequently. His coat took several baths to not have that smoke odor, and we were very worried that the long-term exposure to second-hand smoke would have left him with health issues. Those issues could have included lung and heart disease or lung, mouth, or nose cancer. When we picked up Chance we did notice some raspy and heavy breathing so we feared the worst. However, after breathing non-smoking air for a few weeks the breathing issues are virtually gone. The vet didn’t see any damage to his lungs or heart during his exam. Chance was lucky! Issues could still I’ll arise, but so far nothing has shown up.  If you smoke, will your pet be this lucky? How can you ensure your pets (and this includes dogs, cats, fish, birds, and other small pets) don’t suffer because of your secondhand smoke?  Please read the attached articles for important information straight from the FDA.
https://www.fda.gov/animal-veterinary/animal-health-literacy/be-smoke-free-and-help-your-pets-live-longer-healthier-lives
https://www.fda.gov/consumers/consumer-updates/secondhand-and-third-hand-smoke-may-be-making-your-pet-sick
Nicole Laber, Board Treasurer